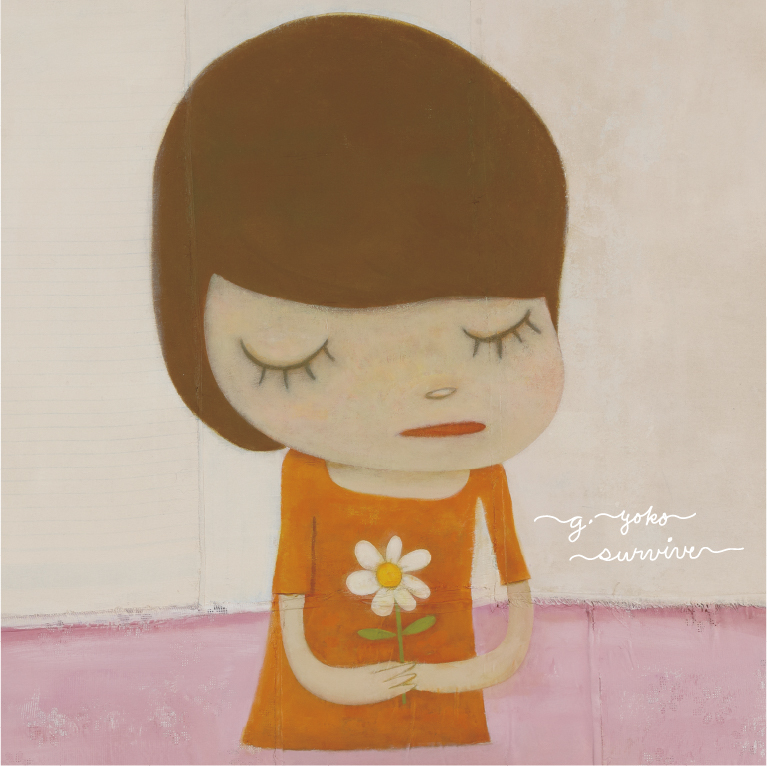 In April 2021, the album “Survive” by G.Yoko, a female singer from Ishigaki Island, was released.
The album was produced by Hiroshi Yamaguchi of the rock band HEATWAVE, and the cover art was done by world-renowned painter Yoshitomo Nara.
The whole album has a pleasant ambient sound with the scent of the island’s sea and soil. From an island under the declared state of emergency of Covid-19, her music quietly gives us courage for tomorrow.

We conducted an email interview with G.Yoko in Ishigaki Island.

Q: Please tell us how you came to make this album with Hiroshi Yamaguchi. When did you start working on it?

The seventh song on the album is called “Sora wo Tonde.” I played the song on guitar, and Mr.Yamaguchi recorded it with a small recorder, then dubbed and mixed it in his studio. That was the beginning of making this album; it was in 2019. Then I started working on other songs to try to make it.

Q: Did you have a specific image of what you wanted the album to be like?

Anyway, I wanted to cherish the feeling of what I like to do.
The title of the album, “Survive,” was inspired by my mother’s struggle with illness, which made me realize how precious it is to love and want to do things. I gave it to myself because I wanted to live with that feeling. So I created each song according to its own image, trying to make it energizing, relaxing, and true to my own senses.
The sound of Mr. Yamaguchi’s guitar and the equipment and instruments he uses are vintage and very warm, which I love, so I wanted to create an album with a nostalgic, old-fashioned sound that would make the listener feel relaxed.

“In rock ‘n’ roll, dreams; in handed-down folk songs, love. And I focused my consciousness to make people feel my own roots (including musical ones) in my fading voice.” Hiroshi Yamaguchi (a producer for this album) writes that.

Q: I think you left some things up to Mr. Yamaguchi as a producer. Did you have any worries during this process? What kind of advice did you receive from him?

From recording to mastering, I was able to check every single sound as we went along, so I didn’t have any worries.
Mr. Yamaguchi advised me to sing so that I could hear the lyrics.

Q: You’ve also been in a band. What is the difference between a solo act and a band?

The band is not active at the moment, but since we are all friends living on the island, I think we will continue to play music together in a natural way.
I think solo work is more about expressing the image I have in my mind more clearly.

Q: How do you come up with the images and worldview of the lyrics when you are creating a piece?

I write songs spontaneously while playing the guitar. I get a lot of inspiration from the music and movies I’ve encountered, the people I’ve met, the atmosphere, and the scenery I see on my daily walks along the beach.

Q: It’s difficult for you to perform live at the Covid-19 disaster or go on tour. What kind of activities do you want to do in the future?

I don’t know what I’m going to do yet, but when things settle down, I’d like to perform live, and then I’d like to create and release more works.

The album was released at the Covid-19 disaster. Although her activities have been slow, there are many music fans who are waiting for G.Yoko’s live performances in various places.  We’d like to keep an eye on her movements from now on.

Born in Ishigaki Island, Okinawa ,Japan.
As a child, she lived with her father, a haiku poet, in a house by the sea, where she began writing poetry. When she was a high school student, she became interested in music and began writing her own songs on the guitar. Currently, she lives in nature and creates music and paintings in her studio at the beach house.